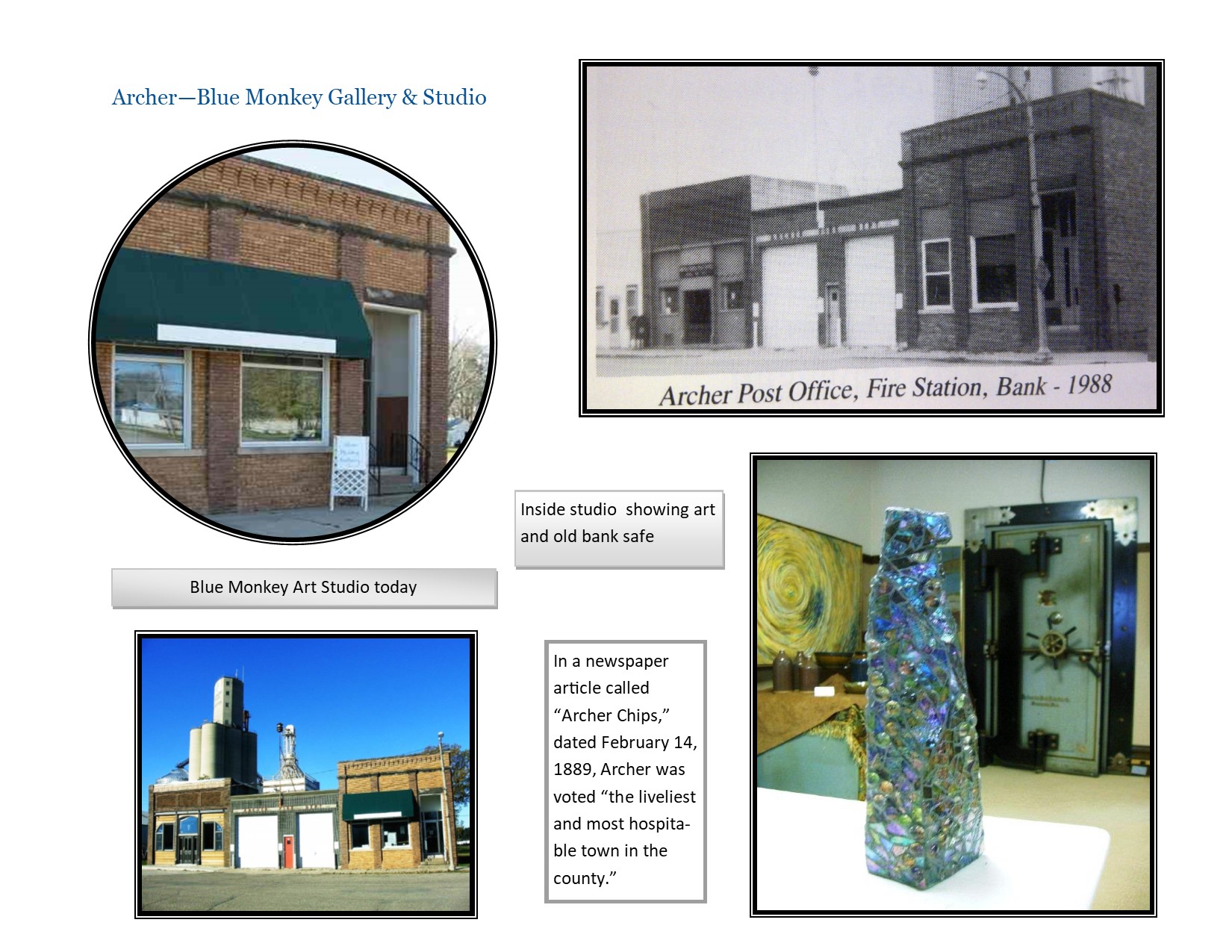 Archer Bank
Lot five – D.H. Smith built a frame construction here in 1898 to be used as a bank.  About 1914, this building was moved across the street to Lot two of Block six and the present bank building was constructed on Lot five.  The bank was founded in 1898 by D.H. Smith and reorganized in 1901 by John H. Archer, William Briggs and D.H. Smith.  D.H. Smith was cashier its first seven years and W.J. Sinyard was cashier in 1914.  This bank had nearly 3000 acres of Mr. Archer’s land behind it, making it a very solid and secure bank.  The bank merged with Security State Bank of Sheldon in 1964.

Attempted Bank Robbery 1924
An attempt to rob the Archer Bank was made during the third weekend during August of 1924.  Postmaster Henry “Crocker” Leemkuil had  driven his car into a garage back of the bank during the “wee” hours Saturday morning.   As he was walking to his home he was attacked by one of the bandits who probably thought they had been seen in the bank.  Mr. Leemkuil was taken by his attacker and two accomplices to a boxcar near the Farmers Elevator.  They couldn’t get the car open so Henry was tied hand and foot to a chair and a gag placed in his mouth.  This was done in an old shack near the tracks which was used as a tool house.  The robbers were kind enough to leave a note on the outside of the door saying there was a prisoner inside.  The three men then returned to the bank, emptied the stamp drawer of about $9.50 and took a hand gun and some ammunition from another drawer.  Apparently afraid of detection they gave up trying to open the safe and left town.  After a few hours Postmaster Leemkuil succeeded in freeing himself by means of an old pair of shears that happened to be nearby in the shack.  He at once turned in an alarm, but by that time the outlaws had vanished.  Sheriff Geister from Primghar and Sheriff Synhorst from Orange City both arrived in good time but failed to find any clue leading to the identity of the bandits or in what direction they travelled when they left town.
Another bank robbery was attempted in 1951 but was unsuccessful.

Archer Centennial 1888-1988
Currently the Archer Bank building is home to the Blue Monkey Art Gallery.
The Blue Monkey Gallery and Studio opened its doors as a gallery in 2005.  The building is owned by Dave DeKok and the gallery is operated by Lissa Lane-Johnson and Karen Spears.  Many of the original fixtures are still there such as the vault with two entrances and an iron gate partition separating the safety deposit box area and the main vault area.  This is now used as a storage area.  Under the teller windows and work area are the original oak built-in drawers and cupboards. The entryway still has the original octagon tile floor, marble baseboard and built- in counter for customers to use.  Several bank desks and a table are used now to display art.  Currently we have 10-12 artists who sell their work out of the gallery.  We are open on Saturdays 10:00-4:00.  Throughout the year we schedule special events such as an art  demonstration day, an outdoor art cafe with entertainment on the green space, and a fall open house.