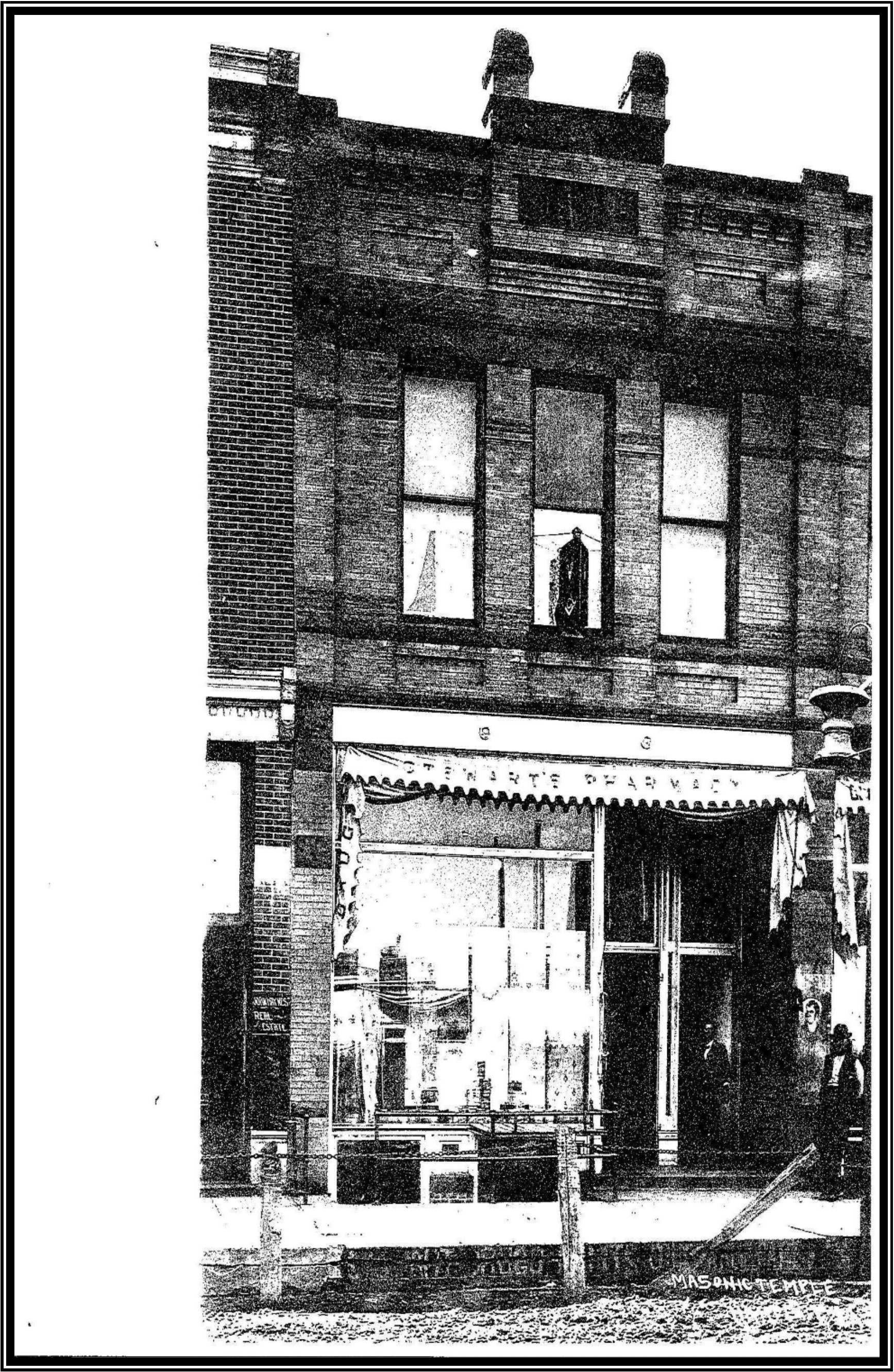 This building is now occupied by Med-Equip. It was built in 1905 and was first occupied by Stewart Drug Store with the upstairs rented by the Masonic Lodge. Stewarts was followed by several drug stores including E.U. Thomas and Chet Almgren. The Masons were upstairs until a few years ago when they merged with the Sanborn Lodge. 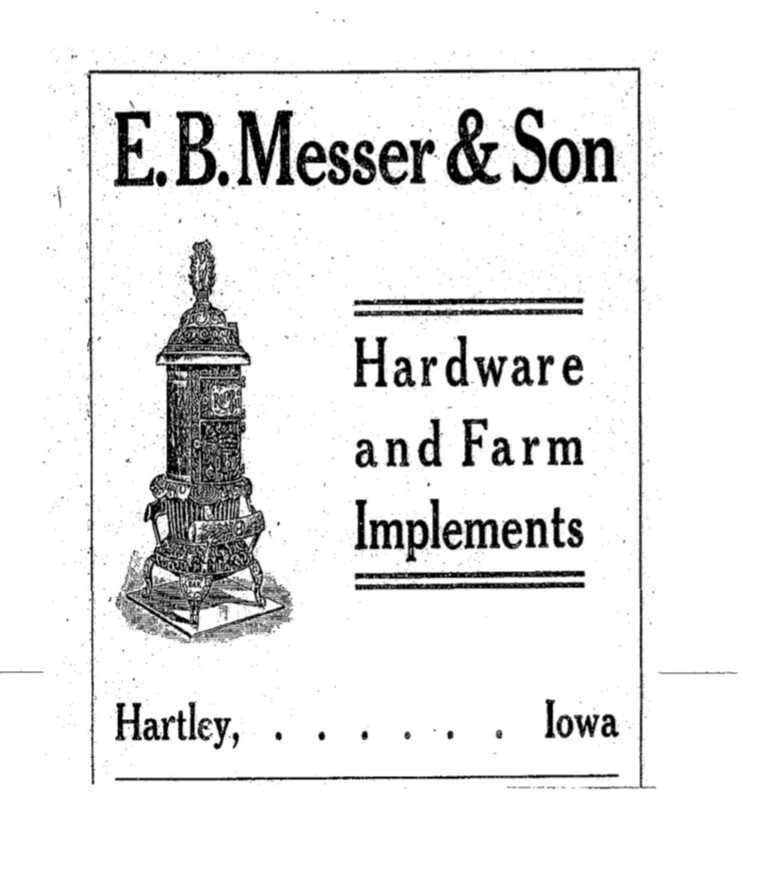 The E.B. Messer and Son building was built in the early 1900's by E.B., who settled in Hartley after serving as a colonel in the Civil War. He and his son operated a hardware store and later a farm implement business. This building, which in later years housed a department store, now is occupied by a thrift shop. 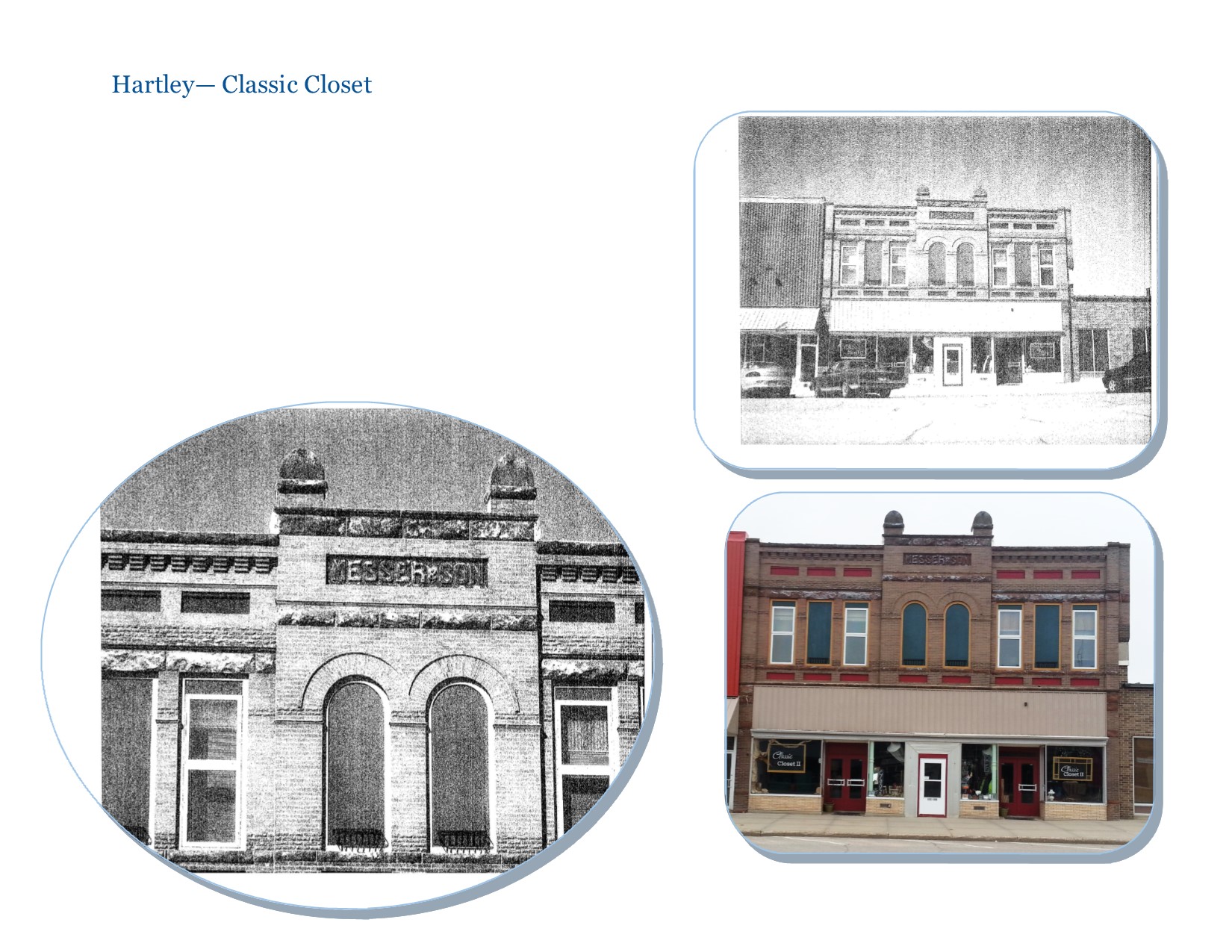 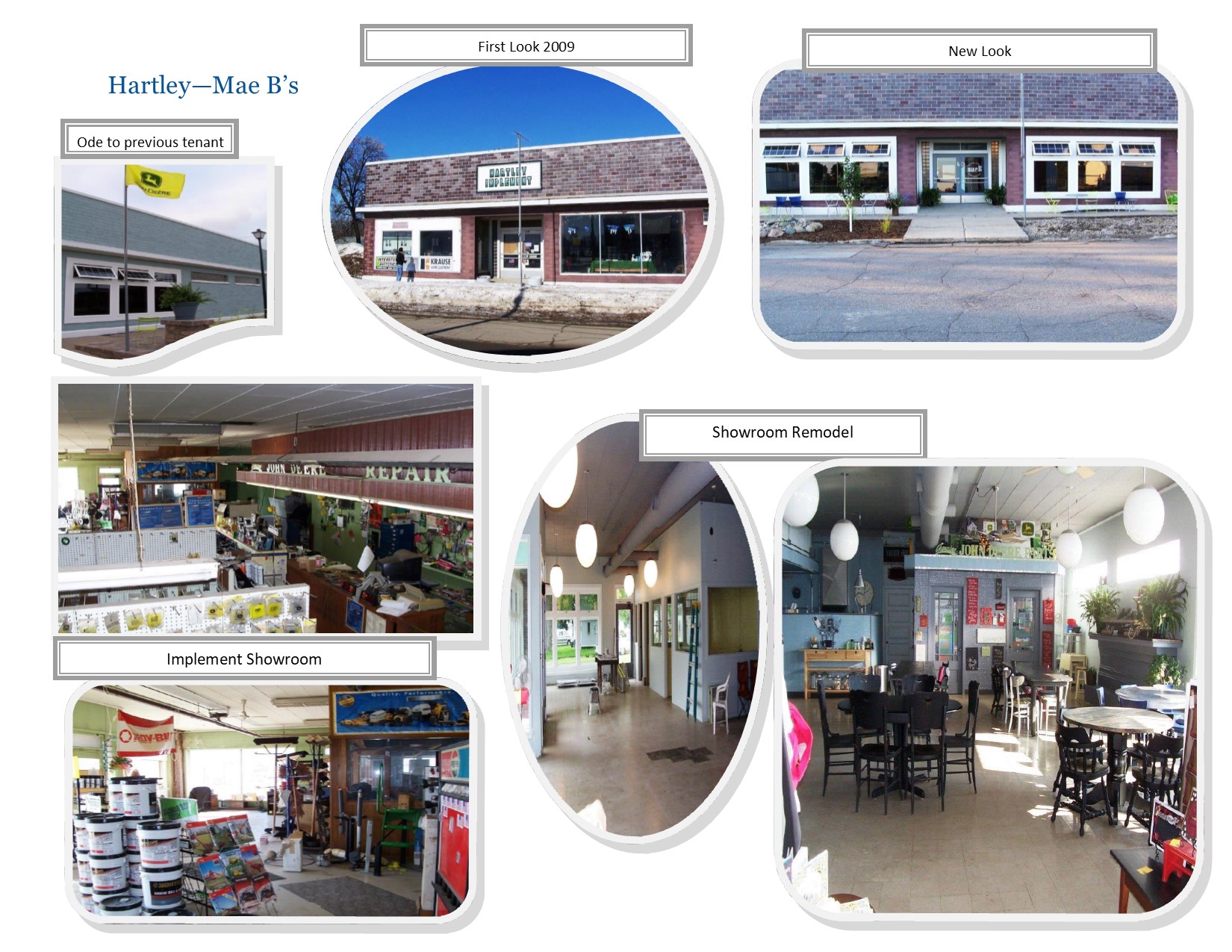 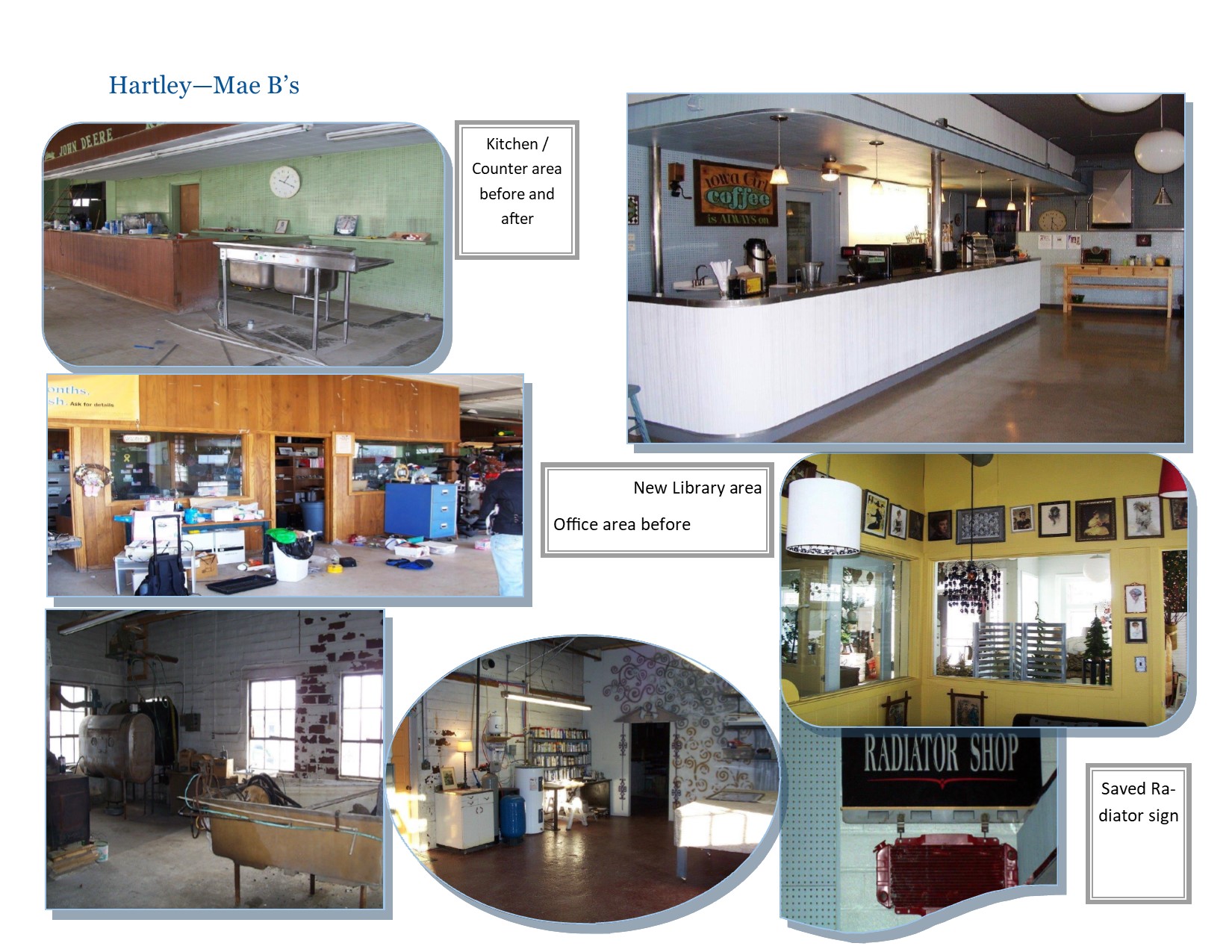 Mae B started in 2006 as an occasional market selling recycled furniture and home goods .  We added a coffee shop in 2007.  We went looking for a permanent home in early 2009 and found Hartley Implement.  We started the new project 04/01/2009.  Cleaning the showroom area took 2 weeks with the help of Pete Riley, the previous owner.  Plumbing for the coffee shop began, along with electrical.  New furnaces and air conditioners were installed.  Rain in April and May prevented the new roof and window install from being completed until the first week of June. Kitchen and bathroom remodels were completed, along with painting and decorating.  The new improved Mae B opened the last weekend in July 2009, just in time for Hartley’s Summer Celebration.

Our building was built in three different stages.  The radiator shop was built sometime in the mid-thirties, the showroom was built in 1946 by Carl Ruby, Ruby Implement and the parts area was added in 1948.  The counter is the original parts counter, we kept the offices and original flooring.  The original 42” fir doors with working transoms were kept and we tried to mimic the look with our new windows.  Shelving units were dismantled and peg boards were used to replace missing ceiling tiles and also the walls of the bathrooms and kitchen.  A wall was added in the radiator shop to be able to keep paint and tool   supplies warm.  The parts area is used to store kitchen supplies and future furniture projects. 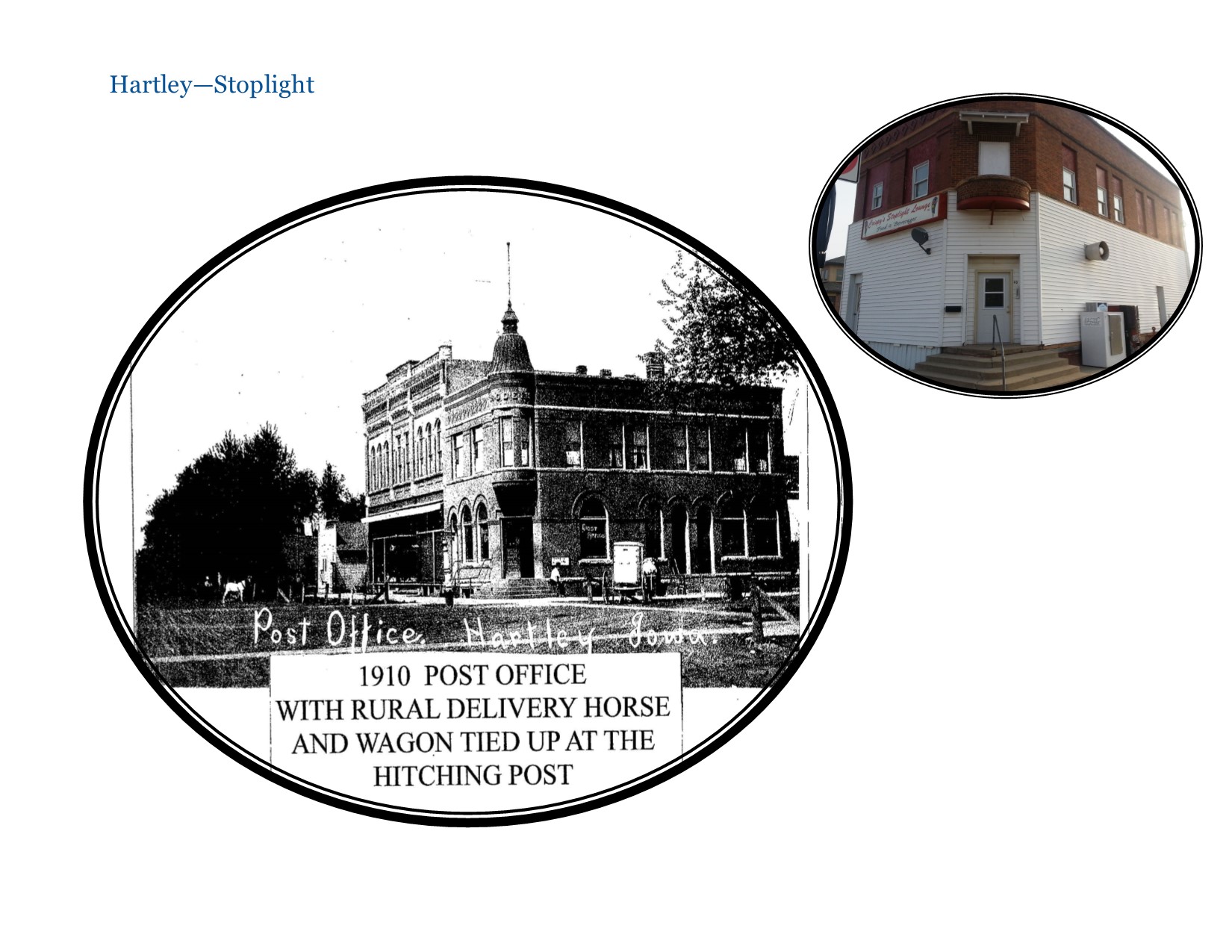 This building was built by R. Broders, who also owned a business next door names Berne and Broders. The parapet blew off in a storm, but the balcony remains. One of the upstairs offices was used by an attorney, J.T. Conn, and a dentist. A barber shop was located in the basement and was accessed by a sidewalk stairway. The building served as the post office for many years as rural delivery began by horse and wagon in 1902. After the post office moved, it became the town library for many years. The Stoplight Lounge is the current occupant. 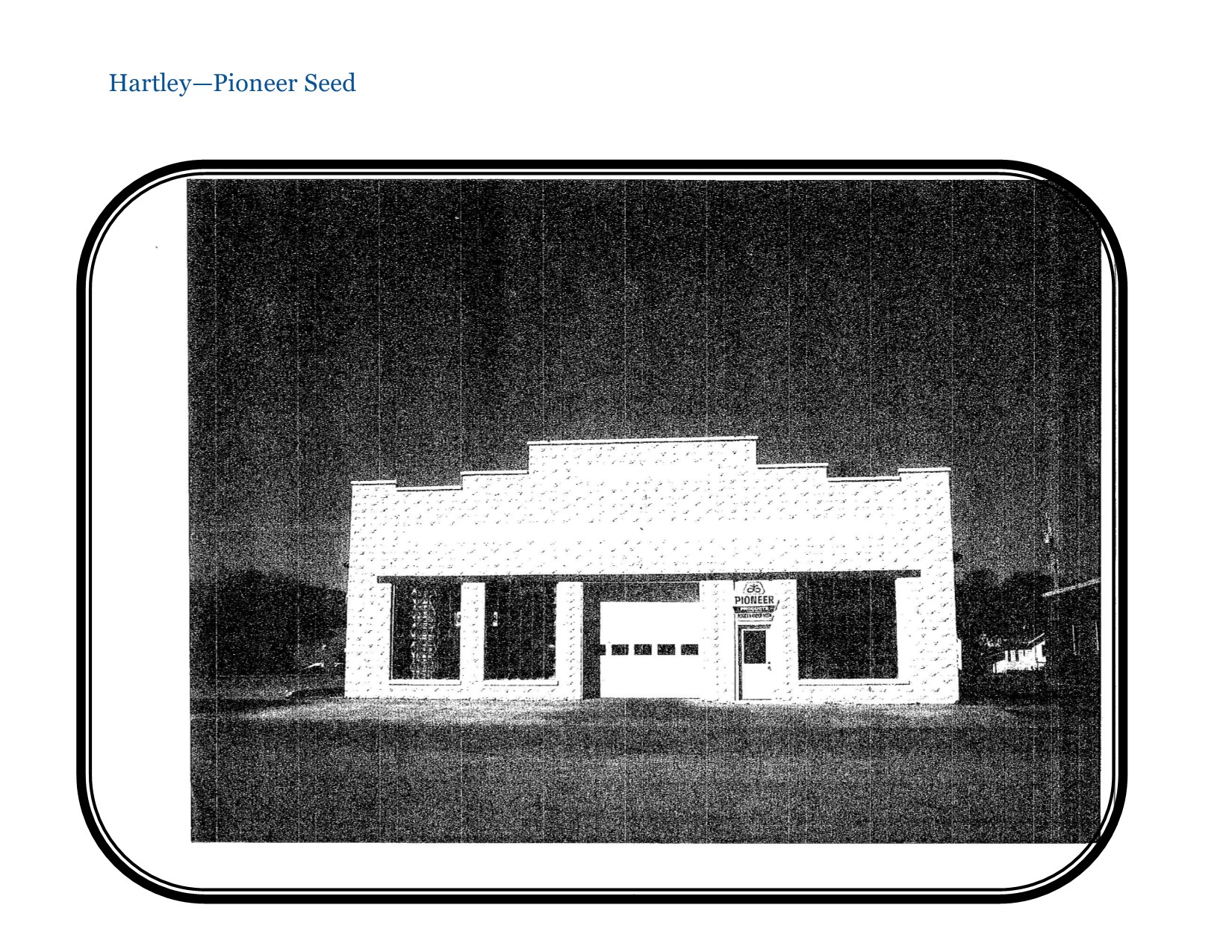 Hartley—Pioneer Seed
51 S Central Ave,, Hartley, IA
Since 1913, when this building was built, it housed auto repair shops and car dealers. The first occupant was Johnson and Messer. Later Roy Newell was the Ford dealer followed by Loder Motors. The last two occupants have been Pioneer seed dealers. 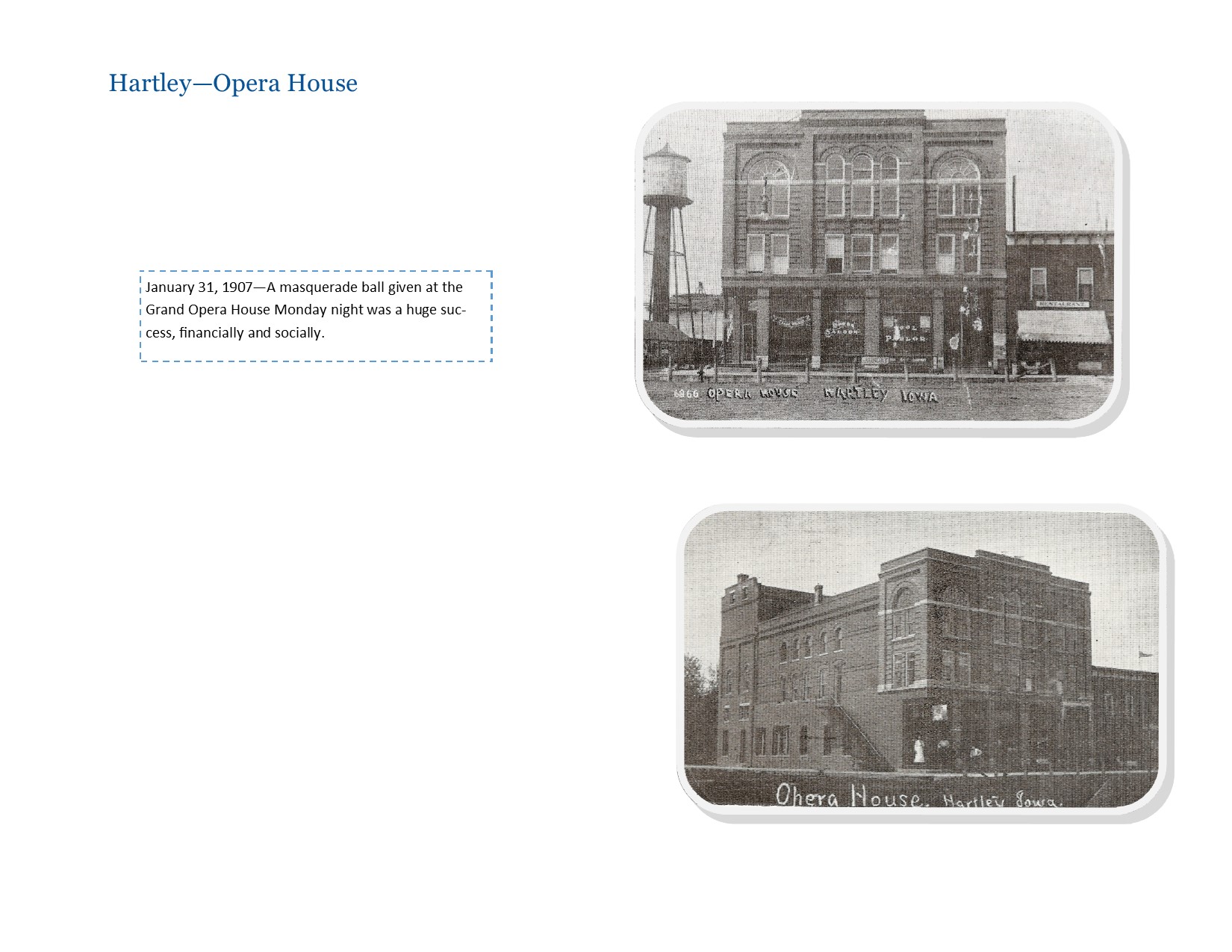 Hartley Opera House
The Opera House was built by Mr. and Mrs. Theo. Miller with construction beginning in 1903. It was a two story brick building with a basement. The basement, which could be used for office or shop space, housed a Chinese laundry for quite some time. The ground level was the location of many different businesses over the years including saloons, restaurants, a newspaper shop and stores. The second level was elaborately constructed with an impressive stage complete with dressing rooms, a spacious main floor at the rear of which was the “Dress Circle” which consisted of several rows of chairs permanently fastened to a raised platform. There were also three rooms at the back which were used for various purposes, usually as cloak rooms. There was a photographer in one of these at one time, and when the streets of Hartley were paved, the Paving Company had their offices in these rooms.
Hartley’s Diamond Jubilee history mentions that traveling stock shows were quite common in those early days along with vaudeville shows. We take that to mean traveling stock theater companies who came through and presented plays to the public from their repertoire. A large number of dances were also held on the second floor. The interior décor included a beautiful girl painted on the wall with a red rose in her mouth.
An annual event held at the Opera House was the Kinderfest, a day for the kids. On these days, families from miles around would come to town in buggies and wagons with the children dressed in their Sunday best. The children would all buy a numbered ticket. There would be gifts labeled with numbers spread out on a table and the child with the corresponding ticket received that gift. The boy and girl who drew number one were king and queen for the day and received gold watches as a prize. There was a Grand Procession of children up and down Main Street and back to the Hall. There were games and dancing for the children and the parents of the “King” and “Queen” were expected to purchase a bottle of pop for each child.
In 1923, the Hartley Star started publication and set up its press in the Opera House building. That same year, the Rex Theater was moved to the north side of the first floor of the Opera House. In 1924, the Opera House was partially destroyed by a fire that supposedly started somewhere near a new furnace which had been installed in the basement for use by the Rex Theater.
The ruins of the Opera House were cleaned up the following year. The better seats were salvaged and sold to the Public School for their auditorium. The stage scenery was donated to the school and the owner of the Rex Theater, Elmer Neebel, moved seats and equipment for the theater and set up an Airdome Theater where the Legion Club was later located. Airdome theaters were popular before air conditioning and made it possible for patrons to enjoy the theater and motion pictures in the summer months.