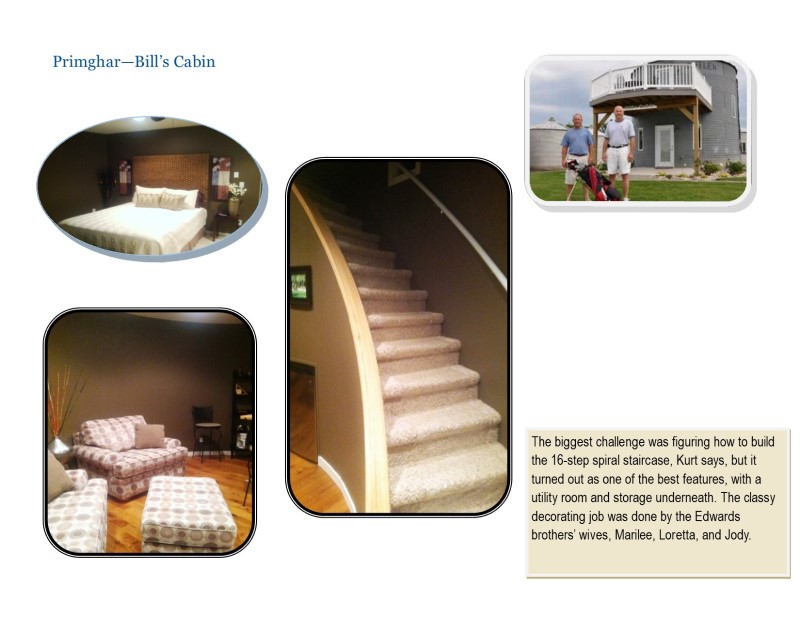 For Our Iowa By Lynn Betts

If you’re looking to put a little farm in your city recreation, you might want to consider the “Play and Stay” package at the Primghar Golf and Country Club.
You won’t find a bed in a corner at “Bill’s Cabin” either, even though it sleeps 4 people. Matter of fact, there are no corners in this very well decorated “condo” overlooking the number 8 green.

That’s because the fancy new “condo-cabin” complete with bar, stove, fridge, microwave, HD cable TV,  spiral staircase and “balcony with a view” has a history of housing corn and soybeans instead of people. You see, this tastefully decorated cabin perched next to the green of the 155-yard, par 3 eighth hole was full of shelled corn just last year.

Now the space inside shows off attractive hickory floors and kitchen cabinets on the main level, and a queen size bed, futon and bathroom with shower on the second floor. The second floor has a door leading to a good-sized deck (a friend donated a bin-warming ––er––house-warming sign, dubbing it “Heckler’s Deck”) that overlooks the west end of the golf course on the east edge of town. There’s a high definition TV upstairs and down, and the place features heated floors and air conditioning.
You won’t find a bed in a corner at “Bill’s Cabin” either, even though it sleeps 4 people. Matter of fact, there are no corners in this very well decorated “condo” overlooking the number 8 green.

That’s because the fancy new “condo-cabin” complete with bar, stove, fridge, microwave, HD cable TV,  spiral staircase and “balcony with a view” has a history of housing corn and soybeans instead of people. You see, this tastefully decorated cabin perched next to the green of the 155-yard, par 3 eighth hole was full of shelled corn just last year.

Now the space inside shows off attractive hickory floors and kitchen cabinets on the main level, and a queen size bed, futon and bathroom with shower on the second floor.

Mom’s Idea
“Our families have talked about converting a grain bin to something like this for 8 or 10 years,” says Jim Edwards. “Our mom, Jean, had seen grain bins used as one-floor cabins in the woods, and she told us we should make cabins from some of our bins. That was while dad was still living,” he says.  Their father Bill had owned the Nicholson and Edwards Grain Elevator in partnership with Bill Nicholson. When their dad passed away five years ago from cancer, Jim and his brothers Kurt and Tom took over the reins, and bought the elevator from Bill Nicholson a couple of years later.

Jim, Kurt, and their brother Tom put their bin conversion plan into motion last fall, when they moved the 4400-bushel steel bin across town from their elevator to the southwest corner of the golf course. It sits with several dozen smaller bins on what used to be a government bin site that’s owned by the Edwards’.

Bill’s Cabin is 7 rings high––a ring higher than the other bins–– and measures 21 feet across. Kurt figures there’s 300 to 350 square feet of floor space on each level (remember the “Pi r squared” formula from      algebra days?).  Remodeling began last October, when local carpenter Brad Smith began cutting slots in two-by-fours to make baseboards that would fit a circular pattern. Thin plywood sheets served as the base for bending and attaching 3/8-inch drywall for insulated walls around the outside of the rooms, up and down.

Williams Opera House, Primghar, Iowa
Henry L. Williams located in Primghar in October, 1887. He purchased a lot and built a general store building on the west side of the court house square. During the following six years Mr. Williams expanded his space and types of merchandise until the scope of his retail ventures also included hardware, furniture, undertaking and a drug store. It was in 1890 that Mr. Williams and his brother or brothers built an opera house, which was conducted by a stock company until 1892 when he   became the sole owner (the opera house is listed in a 1913 directory as being owned by Williams Brothers). In the mid to late 1890’s, Mr. Henry L. Williams was actively involved in politics. He ran for both state treasurer and governor on the        Democratic ticket in 1894 and 1896 respectively.

Past and Present of O’Brien and Osceola Counties, Iowa, Volume 2 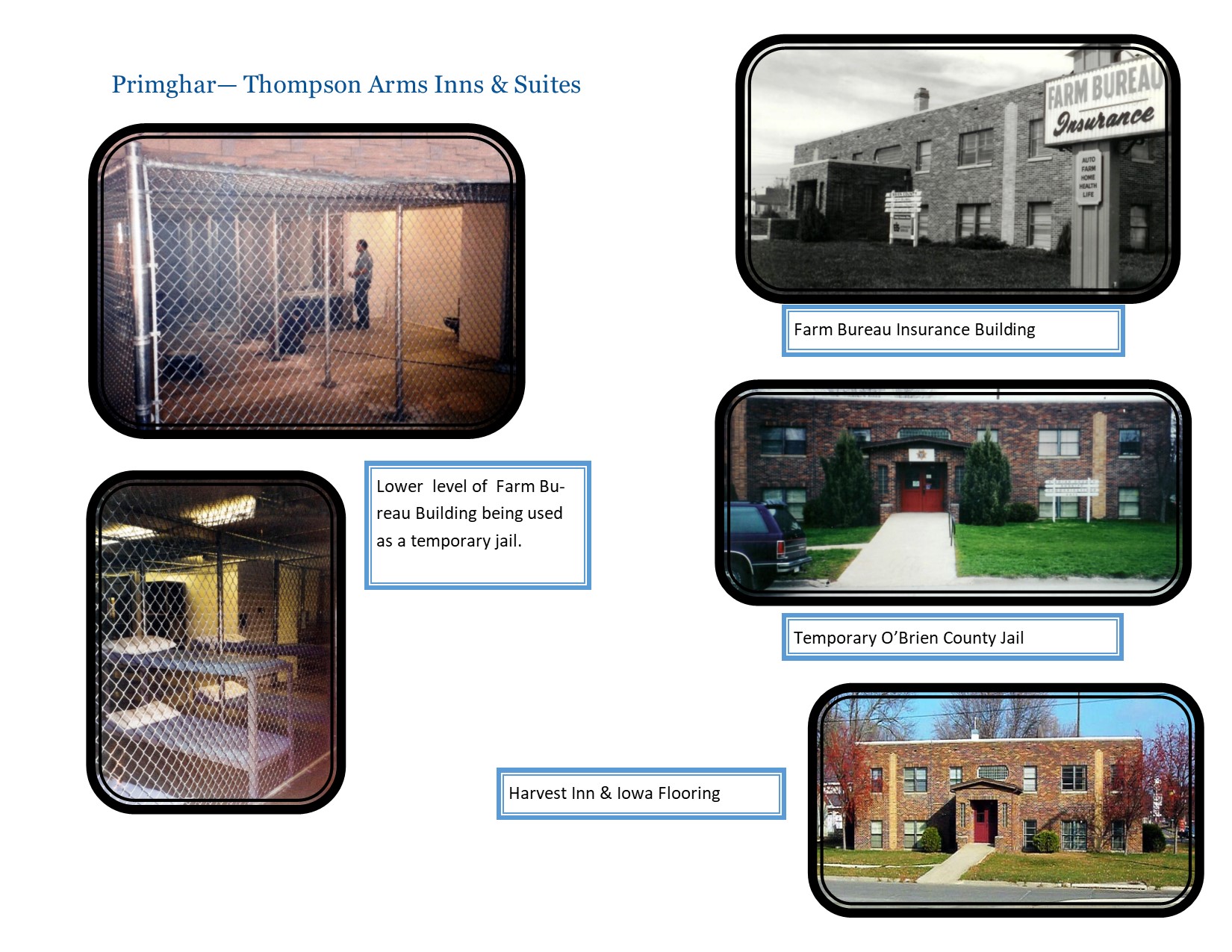 O’Brien County Farm Bureau Timeline according to the 75th Anniversary of the Primghar Community history book.
February 2, 1918 – O’Brien County Farm Bureau was officially organized.
Up until 1935 Farm Bureau had occupied the rooms in the Court House, now used as the County Welfare Office.  These rooms were originally intended for the County Attorney but since that office had been held by local attorneys, they preferred to use their own offices and so Farm Bureau had been allowed to use them.  A new County Attorney had been elected who lived in Sheldon and he wanted the office in the Court House so Farm Bureau had to move.  Several other towns wished to have the Farm Bureau move to their town.  The business men of Primghar got busy and many of them came in and took out membership in the Farm Bureau which was $5.00 at that time, and also worked to find offices for the Farm Bureau.
At a special meeting of the Board it was decided to accept the rooms over the First National Bank owned by Mr. Ralph     Hinman.
In 1947 the Farm Bureau dues were $15.00 per year.  In 1949 the O’Brien County Farm Bureau decided to build a home of its own.  A building committee was authorized to purchase land for construction of the Farm Bureau Building.
In 1998 the temporary jail was established in the old Farm Bureau building located on 2nd street southeast in Primghar to be used until the new jail was built at the current location of 240 1st street Primghar. The Farm Bureau building was remodeled to house 15 inmates complete with kitchen, booking room, laundry, offices and county 911 communications. This building was occupied for just less than 19 months.
In 2003 the Building that recently served as the O’Brien County Jail, an 8,000 square foot facility, was purchased by Joe and Mary Pruss who opened The Harvest Inn, an immaculate hotel.  The couple bought the building in 2001 and opened the Iowa Flooring Institute; the school was a four week course on flooring installation.  The couple put their skills to work renovating the top floor, turning former office space into a motel, which opened in March 2002 and the flooring trade institute was in the lower floor. 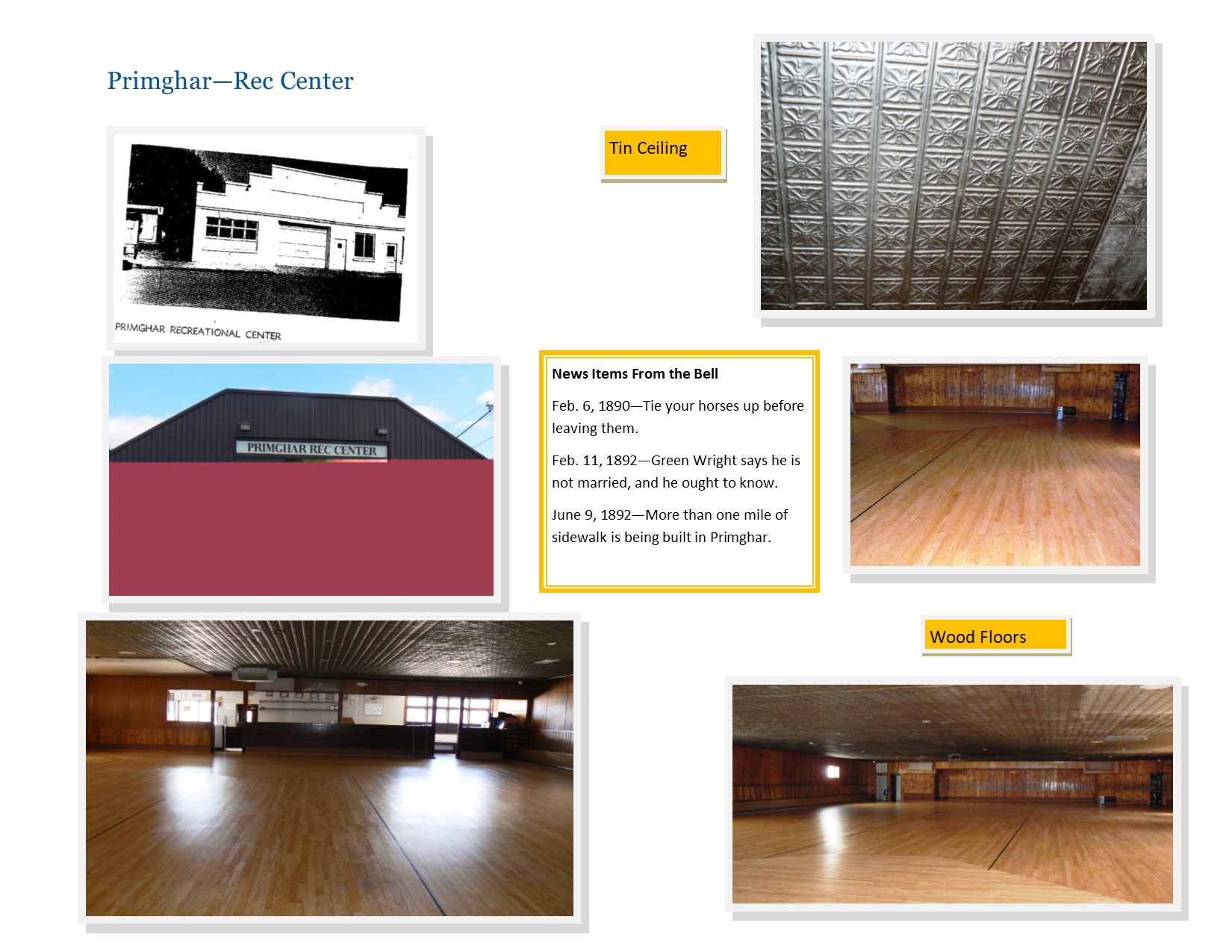 The Rec Center was originally built as a livery stable, where those coming to town to do business could house their horse(s). In the 30's it became Chambier Motors and they sold cars as well as being a service/filling station. Later this business moved to a location on the highway which is where the US Dept. of Ag ASCS is located. After the move the building was then used as an International Harvester dealership. Following that business a man by the name of Pete TenKley repurposed an old gymnasium floor and installed it in the building. The building was then sold to the Williams family to be used for used furniture. Mr. Williams wife then sold it to the city and the city used it for a youth center. A group of citizens formed a board and asked the city to put in pool tables, shuffle board, ping pong tables and also used it for teen dances. In 1960 when the young people began to show lack of interest in the youth center Don Steffens asked the board if they would support a skating rink. Getting the okay, Don first rented clamp on skates and then later the city purchased lace up shoe skates.