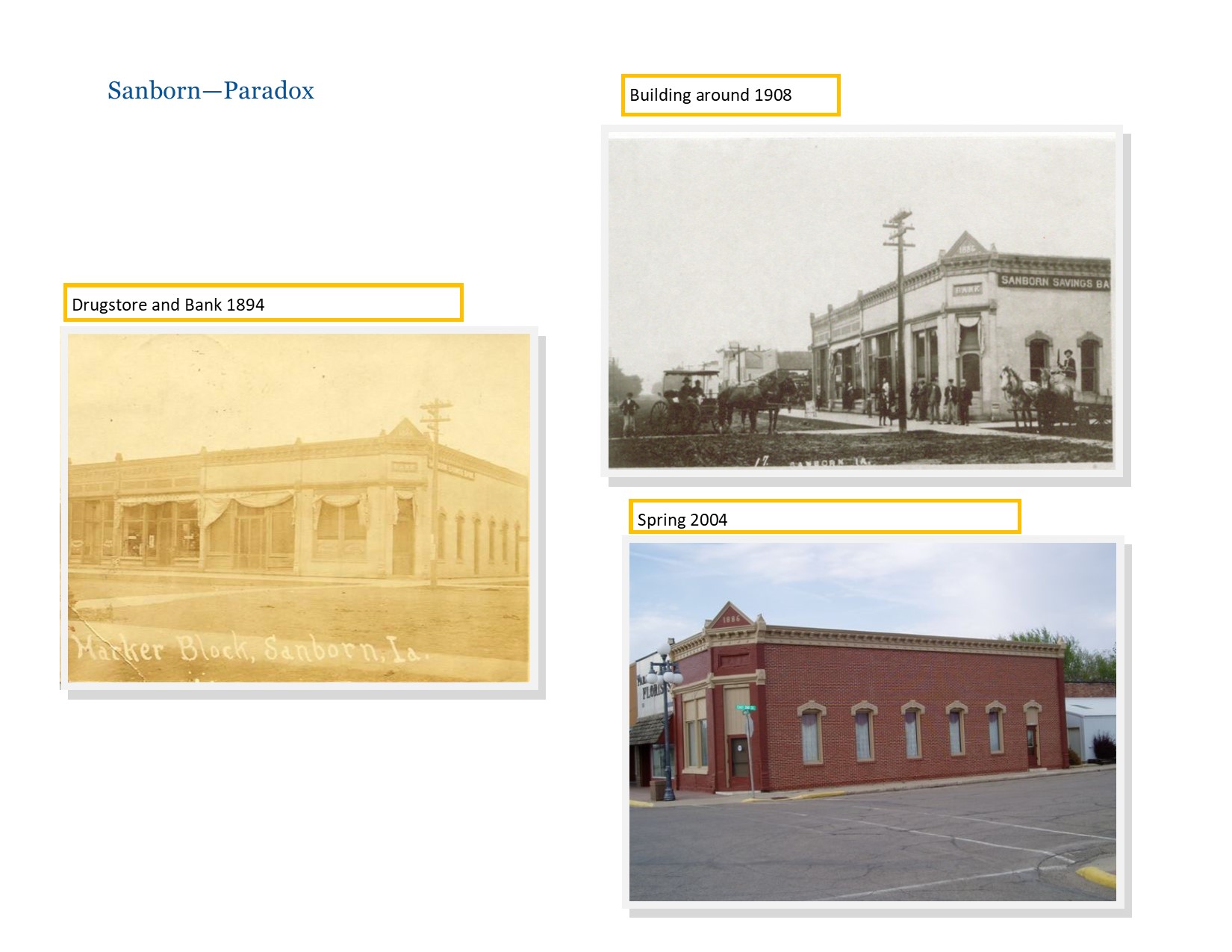 Roller skating was the rage in the mid-1880’s and no town wanted to be without a rink. A large structure was built by local investors in 1884 on the northeast corner of 2nd and Main that would accommodate 200 skaters. With galleries for spectators and a large stage to the rear, it was a multipurpose venue. When the skating craze diminished two years later, the building was purchased by local bankers Harker and Greene, who shortened & divided the area into two stores; The O’Brien County Bank occupied the south half, followed by First National Bank and in 1899, Sanborn Savings Bank. When the latter moved to new quarters on the west side of Main St. in 1950, the east end of the space became a dental office and the west end was rented to a trucking firm. In 1976, Allene’s Closet opened its doors utilizing the entire old bank building. Later it was remodeled into an apartment. In 1886 when the O’Brien County Bank occupied the south half, the north portion was leased to a drug store. Over the next several years, that retail space was rented by the bank to a variety of companies including a hardware business, jewelry store and butcher shop until 1914, when the bank remodeled the interior for a moving picture house known as the Princess Theater. When that closed in the late 40’s, a cabinet shop and flooring business occupied the space until Paradox Florists opened in the fall of 1970. During an expansion in 1992, Paradox acquired the old bank building and after 106 years, the two spaces were reunited creating a unique home décor center. 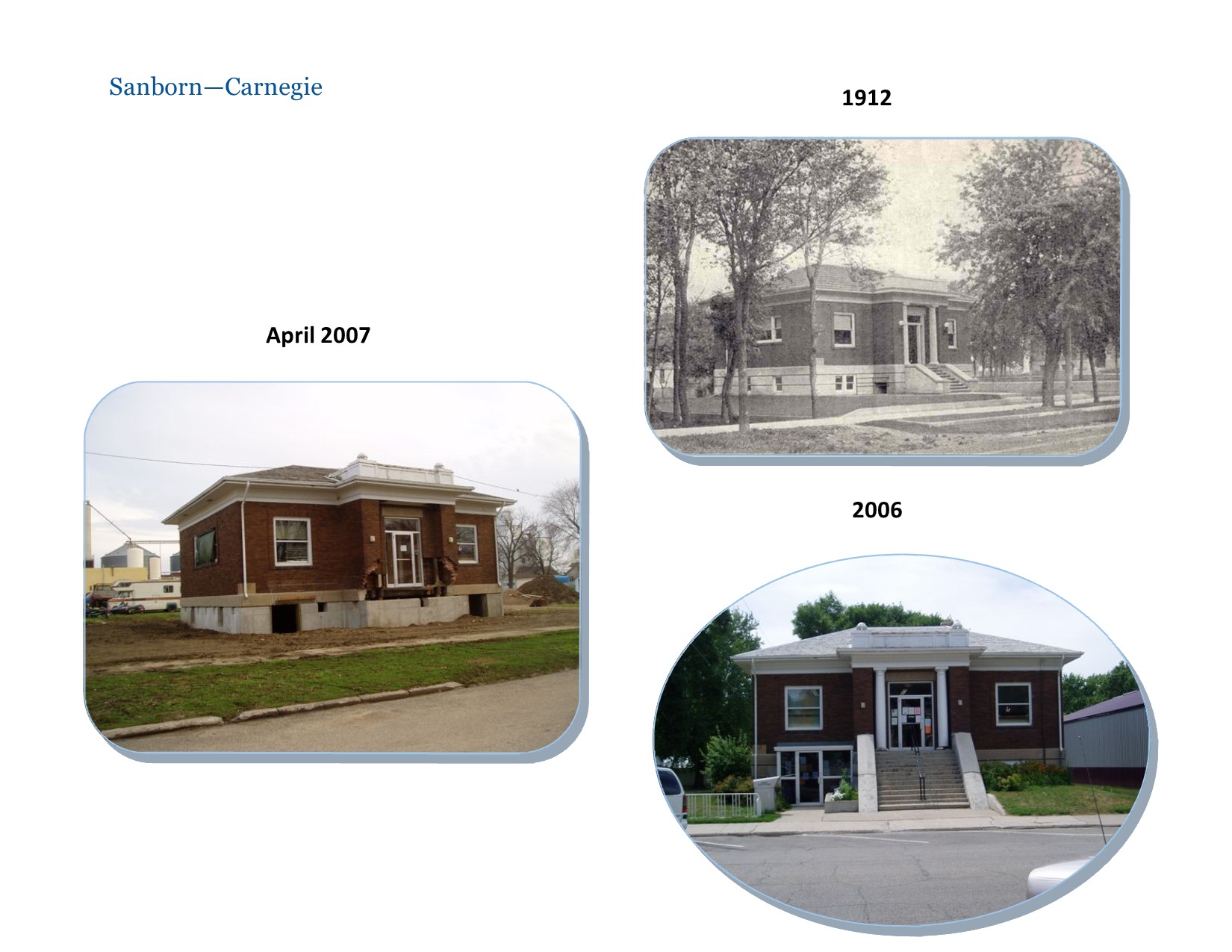 When the ladies of the Twentieth Century Club initiated a town library in 1901, they utilized space in existing buildings as a matter of necessity. Ten years later, their dream of an independent structure was  realized when support from the city, the citizens of Sanborn and a $4,000.00 grant from Andrew Carnegie made construction feasible. The classic edifice served the community over the next several decades and  underwent various structural changes during that time. Finally in 2006, the needs of a modern library simply overwhelmed the available space and plans for a spacious new building left the old one in jeopardy.
Enter Sanborn Preservation, a two-year old organization with more determination than cents, which stepped in to preserve the landmark for the community. A lot just off Main on west Second St. was secured, a mover was hired and the weighty brick building was relocated to its new site. With a plan to re-purpose the interior space for use as a small community center, renovation commenced once the building was stabilized on a new foundation and exterior repairs were completed. Funding has been provided by private donations, grants and for the most part, from the proceeds of a “flea market” operated by Sanborn Preservation volunteers. Progress has been slow but steady on a “pay as we go” plan. When completed, the space will be rentable for small gatherings of all types. 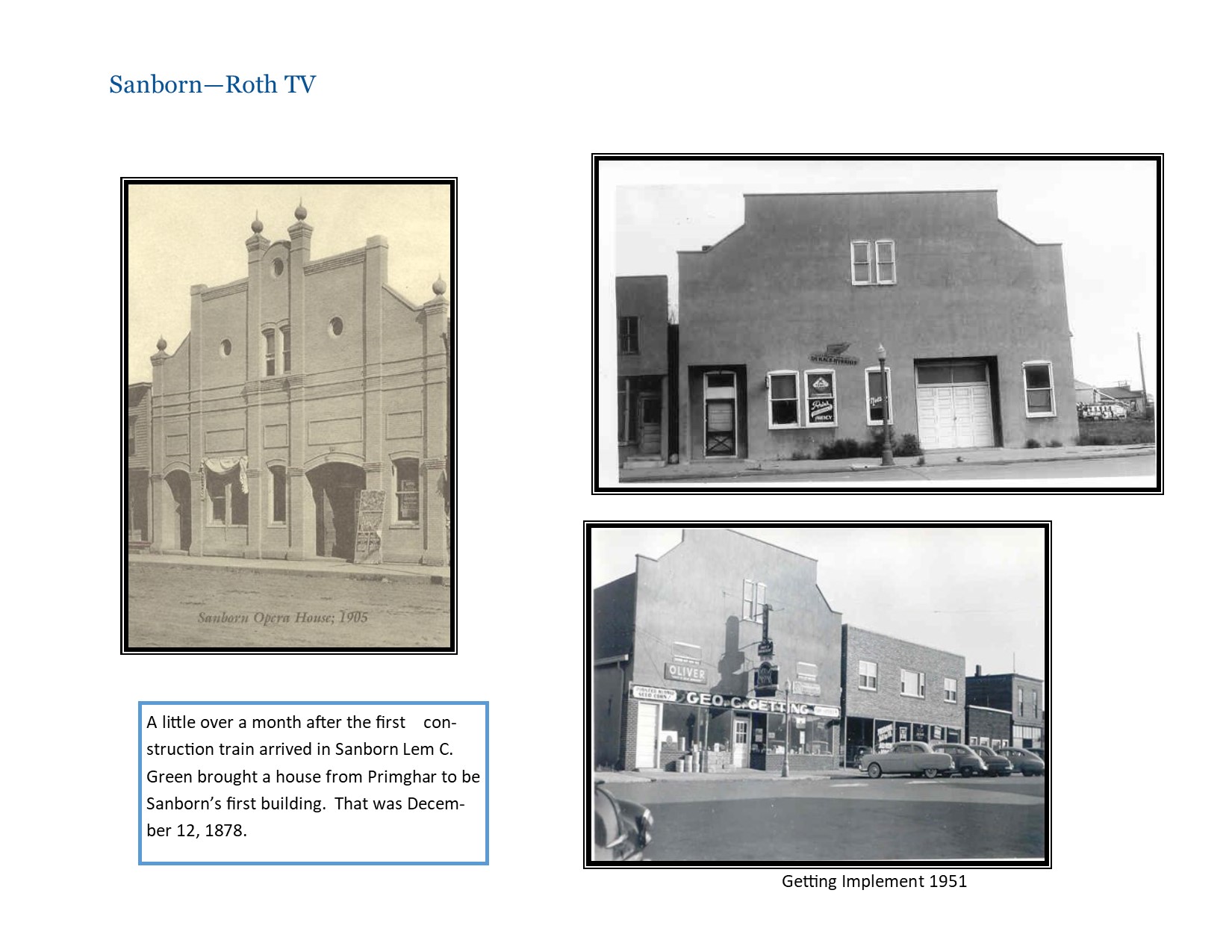 Adequate facilities for social entertainment must have been lacking in the early 1900’s, as a group of civic-minded individuals met in the office of Sanborn Savings Bank in the fall of 1905 with the purpose of organizing an opera house company. Capital stock was set at $5,000.00 and officers were elected.  From the twenty-eight stockholders, a building   committee was appointed and a general manager hired. The imposing structure was built of light colored brick in the “Moorish style”, would seat 1000 people and was well appointed.  It served as the setting for most of the town’s activities including suppers, fairs, plays, dances and boxing matches. It was used by the Community School for graduation exercises until 1939. Traveling companies performed on a regular basis prior to 1915 with reserved seats costing thirty-five cents.  Later, many local residents danced to the strains of Lawrence Welk’s orchestra on the spacious lower floor.
In 1932, the old brick front was determined to be unsafe and was replaced with a new stucco look. Ten years later, only seven of the original stockholders were still residents of the town. The business management and upkeep of the huge building was becoming increasingly difficult, as the entertainment needs of the community had begun to change. At a stockholders meeting in the fall of 1941, it was decided to sell the property and disband the organization. Dale Dick became the new owner with a high bid of $800.00. In 1945 it was sold again to George Getting who operated an implement and seed corn business until 1977, when BFW Associates purchased the building and remodeled it to accommodate Bomgarts of Sanborn.  Since the early 80’s it has been the home of Roth TV. Hanging remnants of an old stage curtain and a portion of the original balcony are mute reminders of an earlier grandeur. 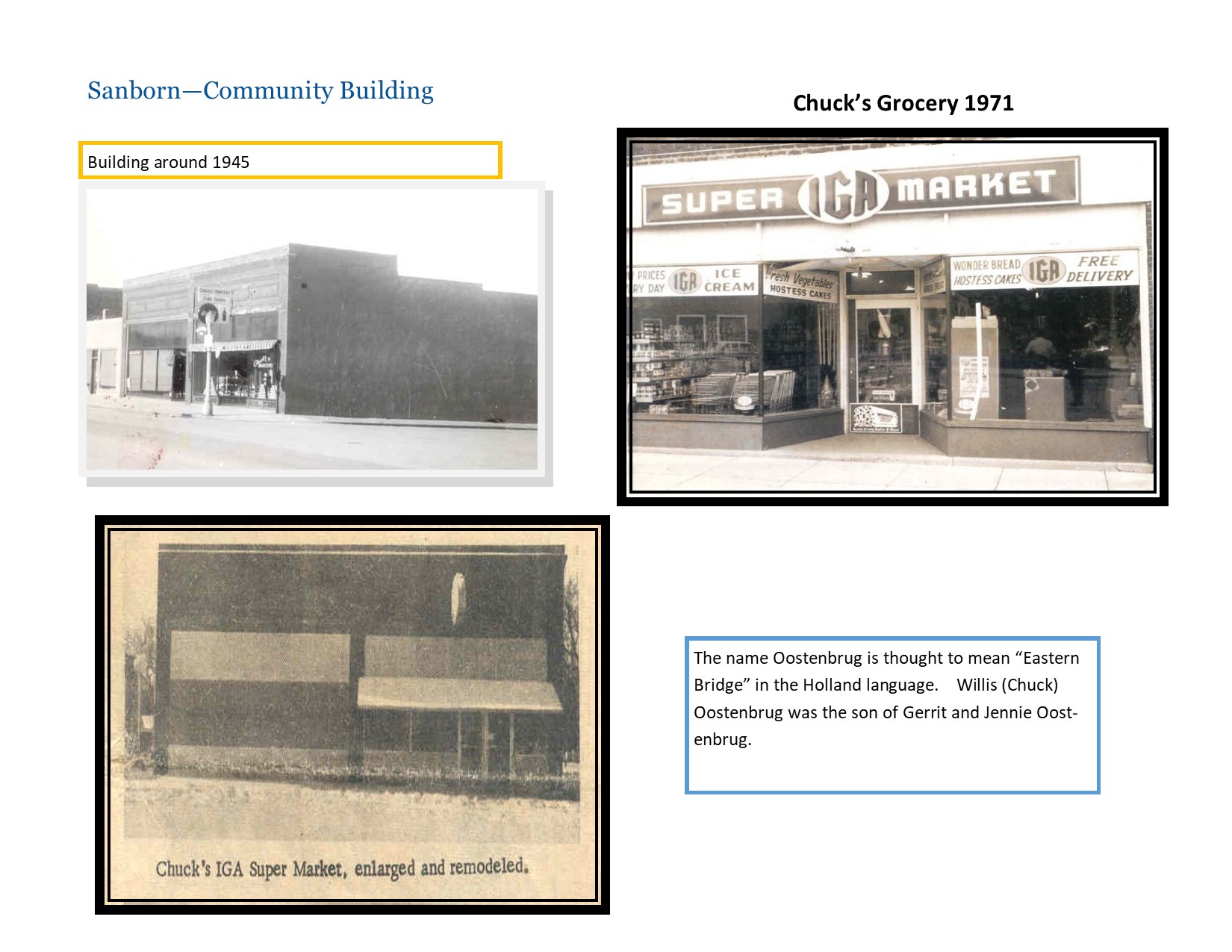 SANBORN COMMUNITY CENTER
A disastrous fire in February of 1914 destroyed half of the business houses in Block Seven on the west side of Main Street.  Undaunted, two Sanborn business men purchased the two lots on the southwest corner of 3rd and Main and contracted for a single story brick building eighty feet long. The north half would serve as a grocery store and the south half as a furniture/undertaking parlor. This arrangement continued under several different names in both places of business until 1971, when Chuck Oostenbrug acquired the furniture portion with plans for a serious expansion of his grocery business.  In 1985 it was rented by Roger Van Egdom who operated Sanborn New and Used there for a few years before it stood vacant. When the American Legion needed a new home following the razing of their old building on the south end of Main, the empty grocery store was purchased by John VanderHaag and donated to the city for use as a community center with the provision that the American Legion would be able to utilize  the building. After some interior remodeling, an open house was held in September of 1997. Several years later, the MIONA Club commissioned the mural on the structure’s north side. Depicting the 18 stall roundhouse and yards, the painting honors Sanborn’s long railroad history.