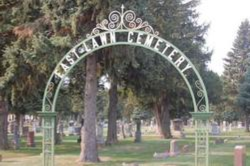 In June, 1881, the new City Council, under Mayor Wykoff, purchased a 10 acre tract for $400 to be used as a cemetery.  The first burial was a 16 year old, Idelia Dixon,  daughter of George Dixon.
The land was not properly surveyed until almost a year later.
Prairie grass was broken and “tame” grass sowed.  A tool house and pump were put in and 200 trees were planted.
By 1893, the cemetery was becoming “shamefully shabby” and the Cemetery Association was founded by the ladies of Sheldon.  The group was organized by Mrs. Sleeper, Mrs. Hollenbeck, and Mrs. Piper.  One hundred ladies contributed $1.00 each to the cause.  The city put forth an additional $400.  The group employed a sexton, graveled the roads and put up fencing.  Mrs. Tom Robison (wife of Sheldon’s first settler and owner of the gravel pit now known as Hills Park) donated the gravel.  The ladies solved the problem of transportation by organizing a “gravel hauling bee and picnic.”  The metal fence and arched entrances were also a result of these women’s efforts. 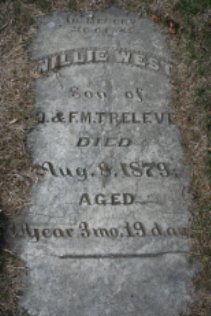 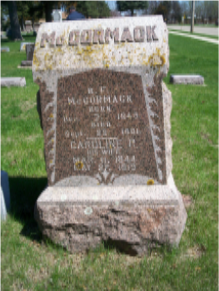 One of the more colorful of O’Brien County’s early settlers was B.F. McCormack or “Mack” as he was commonly called.  From the time of his arrival at Old O’Brien village in 1870 until his death in 1901, B.F. was affiliated with at least five area newspapers in as many locations.  He was well educated, credited with a good command of the English language and had a distinctive writing style which some described as “forceful.”

In Old O’Brien, he served as editor of the county’s first newspaper, the O’Brien Pioneer which continues today as the Sanborn Pioneer.  He led the crew that surveyed the town site of Primghar in 1872, provided the “M” in the name and composed a little rhyme on the subject.
B.F. McCormack was a lawyer.  He practiced for a time in Primghar, served several terms as a county supervisor, invested in a couple of farms and operated a hardware store in Sheldon.  In 1879, he published the third newspaper in the county, the Sheldon News, which he sold to his brother F.M. McCormack in 1880.
From newspaper accounts, it seems that the McCormack family spent some time in South Dakota where he served on the state legislature and as superintendent of the Indian school at Fort Bennet.
In 1897, he purchased the Sanborn Sun, later moving it nine miles west and continuing it as the Sheldon Sun.  Failing health sent Editor McCormack to Minneapolis in September of 1901 where he placed himself under the care of a noted Christian Scientist.
His sudden death on September 22 shocked the community and left his wife Carrie in charge of the paper which she operated for a time.

This Sheldon resident now resting in East Lawn changed the United States banking laws forever.  Bernice lived a lavish life and played the Lady Bountiful to the town of Sheldon.  She could always be counted on to help a needy family or a deserving cause.
However, on January 17, 1961, no one expected her to go from being just a worker at her father’s Sheldon National Bank to being the mastermind behind an embezzlement that would change the banking world forever.
Guilty of one of the biggest embezzlement schemes in the world, Geiger stole over $2 million from the bank over 39 years.  She was sentenced to 15 years in jail, and the FDIC has used her story as a teaching tool in classes since that time.  The FDIC also changed the amount of money which can be insured and the way that banks are audited.
After Bernice was released from jail on probation after six years of her sentence, she returned to Sheldon to live with her parents.

“Between the hours of 1 and 2 o’clock last Sunday afternoon the people of Sheldon were as startled and shocked as they had seldom, if ever, been before by the report that F. L. Dolloff, the well known jeweler, had committed suicide.”  Thus begins the newspaper report.
Mr. Dolloff was last seen around noon on that day, conversing briefly with friends at the post office.  Two associates from Starett Brothers discovered the body with a gunshot wound to the head at approximately 1:00.  Subsequent evidence proved    conclusively that the act of self destruction was deliberate.  Mr. Dolloff had left a touching note to his wife lying upon one of his own showcases.
The motive which prompted this rash act could only be surmised.  He was a fine workman, prospered in business and was well liked by everyone.  It was unfortunate that he had recently been involved in a “social scandal.”
The wife of the deceased was overcome by her husband’s untimely and tragic death.  The inscription on the head stone reads “O how much of life’s love and hope is buried here.”
The newspaper account ends with, “This is one of the saddest affairs that ever occurred in our town and we earnestly hope that nothing like it will ever happen in our midst again.” 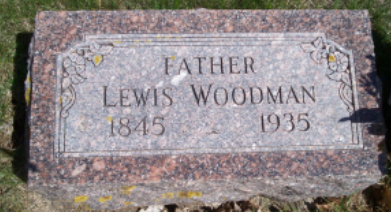 “It is interesting to note how the successful farmers of O'Brien county are gravitating to Sheldon, where they may spend their declining years in comfort and quietude. Scores of the finest       residences in Sheldon have been built by farmers who have made their fortunes on the wide prairies of the county and then come to Sheldon to await their final summons.” This description of Sheldon is found in an early history book.
The book continues to describe Lewis Woodman as one of the finest examples of a successful farmer.  Lewis was born in Grafton County, New Hampshire.  He received a good common school education there and lived with his parents until age 21.  He then moved west to “seek his fortune.”  He first settled in Clayton County.  Later he moved to Poweshiek and then to Sac counties.  He finally decided to settle in Dale Township in O’Brien County and bought 160 acres of land that had “never been touched by the hand of man.”  He added another 160 acres in Summit Township.  He owned over 320 acres in this county which is “well improved in every way and nets him handsome returns.”
In 1910, he permanently retired to Sheldon where he had two lots and a beautiful residence.  He lived the “life of ease” there until he died in 1935. 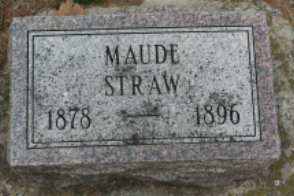 Maud Straw’s shocking murder goes down as one of Sheldon’s mysteries.  Maud was a pretty, popular young lady looking forward to her graduation.  One day she told her school friends that she had to hurry home as she was having a guest for supper.  The next morning her body was found.  She had been murdered by being given lye to drink.   Although a suspect was  arrested and taken to Primghar for a grand jury trial, there was insufficient evidence to prove him guilty.
In 1998, the Historical Society planned to buy a headstone to honor the girl who died so tragically 102 years earlier.  As the group set out to find the plot, they discovered an interesting conclusion to the Maud Straw story.  Jonathan and Narcissa Humphrey had a plot in East Lawn.  Narcissa died the year before Maud’s murder.  Jonathon died in Independence, IA and could not be brought back to Sheldon for burial.  The couple’s daughter, Mary A Wilson, offered her father’s empty plot for Maud’s burial.  The “e” spelling on her headstone comes from another Maude in the Humphrey family.