On April 28, 1876, the O’Brien County Bell reported that the people of Liberty Township were surveying a plat for the cemetery and would plant trees in the spring.

Luella was born and grew up in Calumet.  On June 24, 1930, she and Miss Constance Meier, were in the Calumet State Bank when it was robbed.  Both  ladies told of entering the bank, having a gun put against them by the robber and being ordered into the bank vault.  They were too

frightened to do anything but obey orders.  Two other witnesses - Ray Mugge and Charles Mathern - identified the robber as George White (alias “the Turk”).  After the robbery, 12,000 copies of a flier were mailed throughout the United States.  An officer at Long Beach, CA recognized White.  O’Brien County Sheriff, Edward Leemkuil, went there after him.  George White was sentenced to life imprisonment at Fort Madison with hard labor. 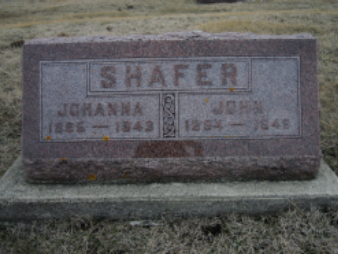 John Shafer was born in Germany and settled in Cherokee County where he met his wife Johanna, who was also from Germany.  The Shafers moved to O’Brien County and farmed 317 acres with horses until introduced to tractors in 1928.

The stock market crash of 1929 marked the beginning of the Great Depression.  One Iowa farmer in seven had lost his land through foreclosure in the 1926-1931 period.  The foreclosures affected 33,000 farms and more than 5 million acres.  A Farmer’s Holiday Association was soon formed as a result of their despair and hard times.

John also faced a foreclosure sale on April 27, 1933.  The sale of the 160 acres at the Primghar courthouse was the first of several confrontations between the farmers and the law. Activist farmers, calling themselves “Seventy-Sixers” and “Minute Men,” traveled from as far away as Hinton to be at this 10:00 a.m. sale.  Their purpose was to prevent the foreclosure sale.  The O’Brien County Sheriff got wind of the plans and swore in 22 deputies. Dozens of farmers meandered into the O’Brien County Courthouse, pretending to have no other purpose other than gossiping and loafing.  At 10:00 the farmers rushed the deputies in a bloody but unsuccessful attempt to get to the third floor and stop the sale. Eight or ten farmers were injured, most not seriously, according to reports. The farmers retreated.  Herman J. Warm (Depot Agent at Calumet) bought the farm that day for $7,400.
For over 100 years, John’s remaining acres continue to be farmed by the family. 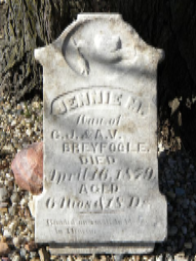 This headstone can be found on the home of David Schmidt, at 417 S Bunce in Calumet.  The child’s body was moved to the Liberty cemetery though the marker remains four miles away.

Charles was born in Sioux City and was adopted by Eri and Nellie Huffman.  The family, living in Canada, was again broken up by the death of Mrs. Huffman, and Charles came to Iowa to live with an aunt and uncle, Roy and Mayme Rembe.
Charlie and Lucille (Ahrens) met at a popular country dance hall called “The Elite.”  The couple moved 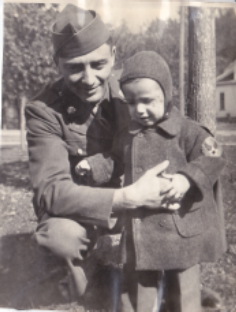 throughout the country from Gaza to Stockton, CA to Omaha, NE.  Charlie attended riveting school and worked for Consolidated Aircraft in San Diego.  Charlie was drafted into the Army in 1943 and returned to Sutherland in 1946.
Following the service, Charlie worked as a mechanic and farmer before purchasing the blacksmith shop in Gaza.