St. Patrick’s Cemetery was started in 1884 by Father Sullivan.  On October 30, 1885 the newspaper reported, “Our Catholic friends have purchased four acres of ground across the street, south of the present village cemetery.”

Father McCormack was born in County Langford, Ireland.  He was a priest for 30 years.  The marker has an Irish cross (Celtic) which symbolizes a combination of the Christian cross and the sun to become the son on the cross. 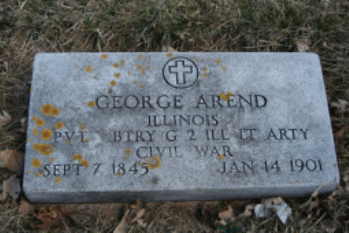 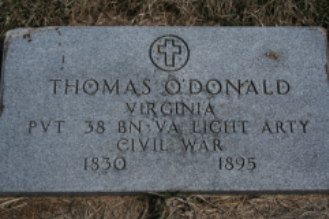 Two Civil War veterans lie near each other in the cemetery.  George Arend was a union soldier serving in the Illinois artillery unit.  Thomas O’Donald also served in the artillery but was on the confederate side from Virginia.

James was born in Ireland.  He served in the Civil War on the union side.  James enlisted in 1864 at Anamosa, IA in the Company C, 2nd Iowa Infantry.  He was with Sherman on the March to the Sea.
Many Civil War veterans settled in Iowa because they received special homestead rights in exchange for their service.

William Stoner’s marker is rather unusual.  It bears only the words “Thrasher and Laborer” and the death date.  A thrasher is one who removes the grain from the stalks.