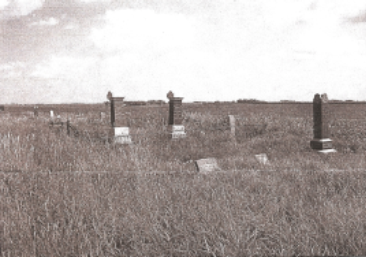 In June,1900, Immanuel Lutheran purchased one acre in the southwest corner of the NW quarter of Section 23 from Fred G. Steuck for $35.00.  Courthouse records demonstrate that in September of the same year, Fred reassumed ownership of the same parcel.  The plot had been used as a family cemetery prior to the deed.  It has been described as largely a family cemetery because most of its inhabitants are related. 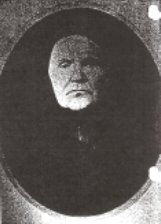 Anna (Raetz) married Friedrich Steuck in 1841.  Friedrich died in the Franco Prussian War.  She was the first to be buried in the SE corner of the cemetery. 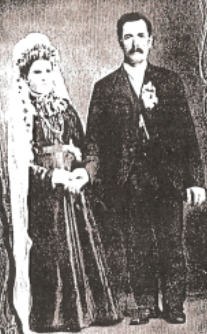 Fred W. Steuck came to this country from Germany in 1881.  He stayed in Dubuque to earn money to send for the rest of the family.  He eventually purchased land in  Center Township.  He continued to correspond with Minnie Schultz in Germany and finally convinced her to join him in America.  They were married December 14, 1900 and raised seven children on their farm.

John and Minnie Brinkert immigrated to the United States from Germany in 1869.  In 1889, they moved to O’Brien County.  They were parents of seven children, three surviving to adulthood -Emma, Henry and Herman.  They left many descendants who remained in the area. 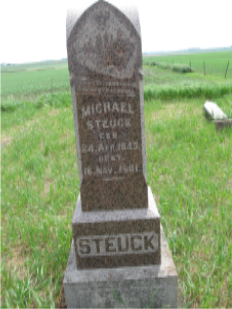 With four small children, Michael and Justina Steuck left Germany for America in 1879.  Included on the journey was Anna, Michael’s mother.  The family settled in Center Township where five more children were born. Michael built the house and planted trees.  In 1885, two acres of land in the northeast corner of the farm were donated to Immanuel Lutheran Church for building purposes.  The Steuck Family was a staunch supporter of this church for many years. 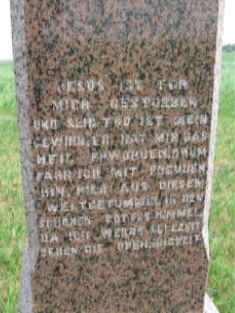 Many of the stones have inscriptions in German.  The verse on the side of Michael’s stone translates,  “Jesus died for me and his death is gain for me.  He has to me given this blessing.  From here I will come with joy for him out of this world and enter into his beautiful heaven of God.  There I will be in everlasting.”  A heavenly city is depicted on the front of the stone with the inscription, “In my Father’s house there are many mansions.” 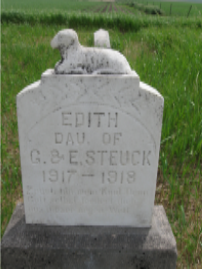 Edith Elsa Augusta Steuck, is the daughter of  Gustav and Elsa Steuck who were married in 1910. (Gustav was a son of Michael and Justina Steuck.)  Gus and Elsa lived on the farm 1/2 mile south of the cemetery where they erected buildings and planted the pine trees along the road.

Stephen is the only non-relative in the plot.  The circumstances are unknown. 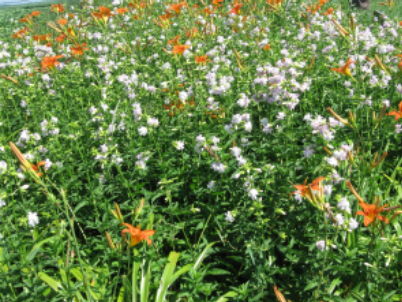 This cemetery on a native prairie boasts a colorful parade of purples, yellows, whites,  ambers and reds throughout the season. Pioneer cemeteries are often an ideal place to see prairie remnants.